Someone got a new toy today... 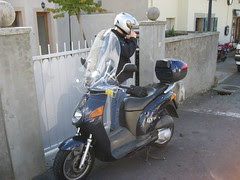 Zach got to pick up his scooter today. Yay! He says he feels more European now. =P

The wind was wickedly cold today... at least it was sunny, but you'd just look outside and hear the howling wind and just want to stay in, curled up in a blanket with some hot tea and not go anywhere. Unfortunately there were a couple casualties due to the high winds... 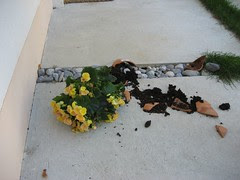 One of my potted flowers (the one that's actually been surviving pretty well, even through my negligent care) fell over and the pot broke (we have it it a reserve small plastic pot for now), and one of Michelle's plants also fell off the wall separating our yards and into one of our bushes. Zach says he'll keep it here so he can later make jokes to her about hoe I tried to steal her plants. 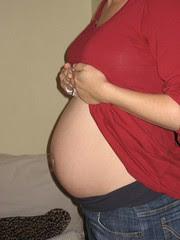 It's funny how even though I see it every day and stare at it quite often (it's ridiculous how much time I'll spend in front of a mirror looking at the latest developments in the shape of my belly button, and the bely in general), when I take pictures and look at them I'm still surprised by its size most of the time. Earlier today I felt this strange sensation near my belly button, and I think it was Loki reaching out and stretching either an arm or a leg-- just pushing out with it gently and then pulling back in.
Posted by Marcy at 2:53 PM