So the first part of what feels like it'll be the most drawn-out move in history is complete (ok, so this actually isn't even that bad compared to international moves, when it takes months for your stuff to get shipped anywhere, but it still feels like there's a bazillion steps to this move). On Saturday Zach and I loaded ourselves, our various bags, our two kids, and the two cats into our car and drove out of Sacramento for the last time as a family. We drove two hours to the San Francisco airport (taking a slightly longer way to avoid the bay bridge since it was gay pride weekend). In an amazing stroke of good fortune, it just so turned out that Zach's brother's girlfriend, Jakki, was taking our same flight so she met us at the airport and helped through security and the plane. This turned out to be kind of a lifesaver, as just to get through security we needed one person to hold each cat, and then someone to walk the kids through. I was a bit nervous about how security would go for this flight, as we had more complicating factors than for any other trip and I've recently heard many horror stories about TSA incidents, but everything went totally fine-- since we had kids we got to go through a shorter line, and the agents were all friendly and helpful. Zach's theory is that TSA in major airports just want to get people through quickly so don't hassle them with weird time-consuming checks and hassle. I don't know if that's true, but am very glad it all went smoothly.

Watching other airplanes = best way to kill time at the airport.

The flight was a direct 3hr flight that also went pretty well. Donovan, Jakki, and I sat in one row, and Zach and Quinn sat across the aisle from us. D's at an age where he's a super chill traveler, especially if you've got a movie for him to watch so that was easy enough. Quinn was a bit more restless, but here Jakki was again awesome and wonderful by playing and walking up and down the aisles with him. The cats meanwhile just hunkered down in their carriers under the seats and didn't utter a meow, probably bc they were scared for their lives.

We arrived in Austin at night. The cats are settled in nicely at my in-laws' house, and we're staying with my mom & Philip. Zach turned around and flew back to SF Sunday evening so he can work this week, then finish packing up our stuff and load up the truck this weekend. The boys are having an awesome time hanging out with the grandparents and other local family, even if we're mostly staying inside thanks to the triple-digit heat.

I was feeling some very strong pangs of sadness in the weeks right before our flight, it was just hitting me how much I'll miss everything we were leaving behind. I even got sad thinking about the last time I'd drive my trusty Fit, which we've had for 3 years and expected to drive for 10+. even now that we're here it really weird thinking that after these few weeks in Austin, we won't be returning to CA but will be moving on to the east coast. Then again, we may very well be back... Zach recently went to an event at a consulting firm in San Francisco and was really drawn to everything there, so we'll see. At this point I know better than to try to speculate or plan anything about where we'll be two years from now. (ps- I don't know why the pictures look so small and crappy when I post them throug this app, if you click on each one they come up larger and look much better... But in-post they look bad. Oh well...)


- Posted using BlogPress from my iPad

Quinn turned 18 months old a few days ago.  Which means I am now breastfeeding an 18 month old.  It's not something I ever set out to do-- my goal with both kids was one year, and then we'd see how things went.  By the time Donovan was a year I was feeling kinda ready to cut back on breastfeeding, and we weaned by about 15 months.  It was initiated by me, but he was pretty easy to wean-- as long as I didn't offer, he didn't really ask.  I think since he had this thumb (and my chin) for comfort, breastfeeding was simply about food for him and it was easy enough to transition from breastmilk to table foods, with extra snuggles thrown in.  I figured it'd be about the same with Quinn... 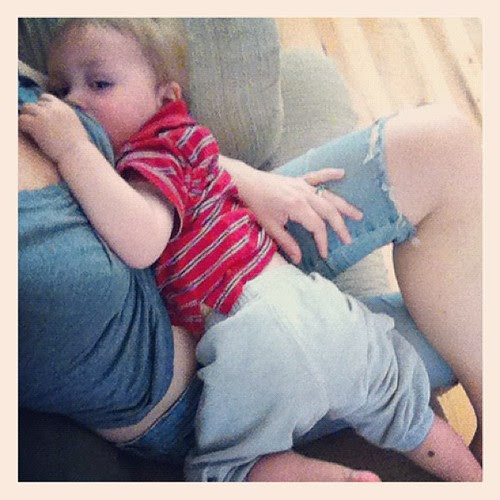 Except that for Quinn breastfeeding has been about much more than just nutrition-- it's also been a source of comfort and security.  I'd say nursing is one of his favorite things, ever.  It helps him fall asleep, it calms him down when he's upset, and I give it at least partial credit for Quinn hardly ever being sick despite all the bugs and fevers Donovan has brought home from school.

A couple months ago I was feeling a bit annoyed with him constantly being on me so I tried to distract him away from nursing during the day....and quickly realized that was way more effort than it was worth.  I wondered if the trips I took (4-5 days each in February and April) would be the beginning of us weaning, but no-- he did fine while I was gone, but he was very much wanting to nurse again as soon as I got back (I pumped while away to keep up my supply). 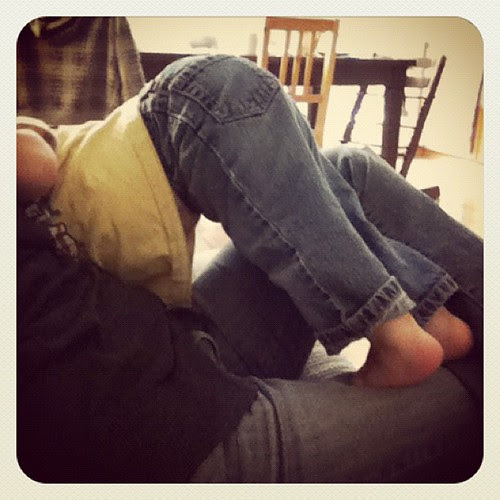 So, here we are.  If you'd asked me at his first birthday how much longer we'd be breastfeeding, I'd have guessed maybe just another couple months.  Now? I honestly have no idea when we might stop.  If he were less into it I might try to wean sooner, but as it is nursing makes a lot of things much easier and still provides many benefits to us both, so I'm ok sticking with it.  It also feels kind of amazing that we are still nursing today, since 8 months ago he went on that 12 day nursing strike and I was really afraid that we were done for good (gotta give a shout-out to Jaye Simpson, local Sacramento IBCLC who gave me the encouragement and advice I needed to keep trying when everyone thought he was self-weaning). 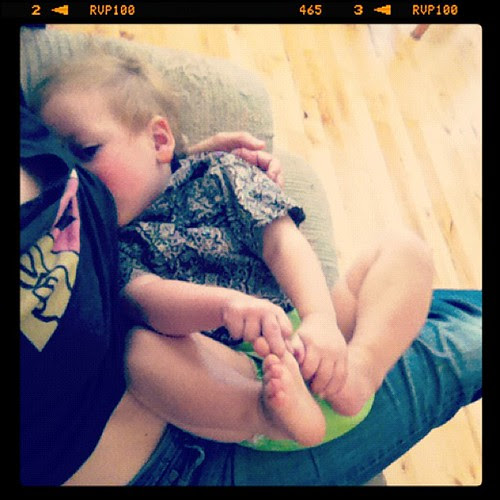 And so now I'm learning all about the joys of nursing a toddler...it turns out they're way more wiggly and active than babies, lol.  He likes to flail his legs and arms around sometimes.  And stick his fingers in my mouth.  And do a "downward dog" pose while still latched on.  The other day he was nursing and he laid himself flat on his back on my lap and started clapping his hands.  Sure, the "gymnurstics" can be pretty annoying at times.  They're also kinda hilarious.  And I guess from here on out we'll just take things as they come, week by week, month by month. 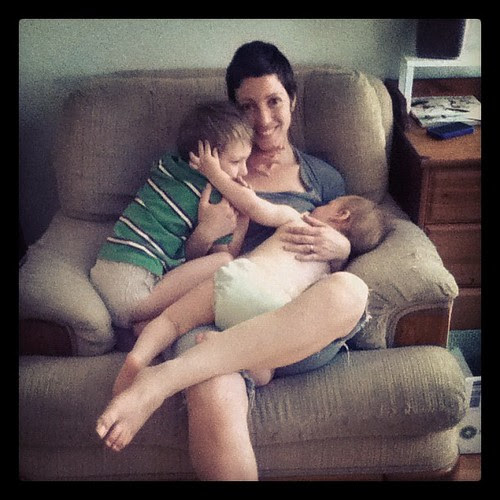 And then I signed up for yet another blog

Soon after the Tuck ASW, I saw a posting on the Tuck Class of 2014 FB page asking for people to write guest posts about ASW for the Tuck Admissions blog. I volunteered to write something up from the perspective of a TP (Tuck Partner, aka significant other of a student attending Tuck, I'll likely be using that term a lot from now on).  They gladly accepted my offer, and so I did.

Then a week or two ago I got a follow-up email asking about contributing bloggers.  They seemed particularly interested in my perspective, since most of the writers for the site are (a) male (b) students.  Since I have such ample time for blogging, I accepted and long story short I just published my first post. Wheee!

I realize that by signing up I have joined the Rah Rah Yay Tuck Virtual Cheerleading Team (it is, after all, a blog dedicated to convincing people to come to Tuck), but I'm pretty happy about that.  I suppose the experience could all be awful and horrid from here on out, but that seems highly unlikely.  And as a TP myself, when we were grappling with the decision between New Hampshire and Texas, I went to that blog to search for the experiences of other TPs. I found some entries, many of them a couple years old. What I found helped give me a sense of the experience, and what life at Hanover might actually be like. For example, one post provided a run-down of the different grocery stores in the area. I know that sounds totally boring but when you're considering moving to a town of 10,000 people this is the sort of stuff that's reassuring to know; or a perspective on winter and what sorts of things we can do (other than sit around complaining about it being so damn cold).

But as helpful as those were to read, the pickings were slim and there's almost nothing about life at Tuck with kids.  So, I'm hoping to change that. We'll see how it goes. It may mean I end up posting here even less frequently. Or maybe there will be enough cool stuff to write about, and enough free time to actually write it out. Life is all about ebb and flow, and blogging has been ebbing for a while now and I'm kinda ready to get my blog mojo back.
Posted by Marcy at 9:46 PM 2 comments: