Quinn's 365Project is officially done! I'm quite proud to have stuck to it. People laughed when I said I wanted to do a 365 of D's first year, and then laughed some more when I wanted to do it again for Q. And yet, here it is. I've accomplished little else in the past year-- the house is almost always a mess, the dirty clothes pile almost always larger than the number of clean ones, etc. But I now have this record of my kids' first year, which I figure I'll care about more than how clean our house was during that time.  So, yay. Now I need to get to work on finishing the photobook with these pictures... that will hopefully happen before his second birthday. ; )

BTW that sleep fairy? Total tease. We got two random, great nights and since them it's been back to the usual. And so life continues through the sleep deprived fog. One day I'll be able to think clearly....right?
Posted by Marcy at 2:45 PM 2 comments: 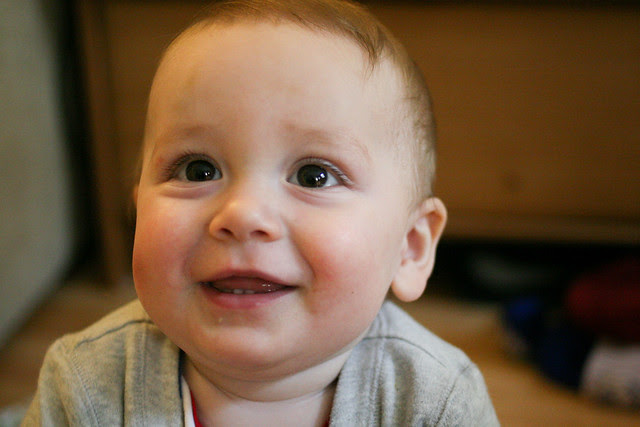 One year ago this morning baby Quinn came into the world, in a tub of water in my bedroom.  Exactly how I'd imagined it.  Yet also like nothing I could have expected.

At the risk of sounding like a broken record, the past year has been the hardest of my life.  That baby has tested me in more ways than I could have ever imagined.  And now here we are.  Every day keeps getting better, every day I adore him more.

Here's to a very happy birthday for my darling baby toddler boy Quinn.
Music: Lullaby by The Dixie Chicks
Posted by Marcy at 7:00 AM 3 comments:

So the sleep fairy visited us last night

Quinn pulled one of his magic sleep tricks last night, and slept from 9:30pm-5:30am. I slept about 6 of those hours and OH MY LORD WHAT A DIFFERENCE. For comparison, the night before that my sleep looked like this: 1hr + 1hr + 3hrs + maybe another 20-30mins of dozing.

One thing I've realized this past year: when I'm used to sleeping less than 3hrs at a time, getting a longer stretch of uninterrupted sleep feels AMAZING. It is utterly astounding what a huge difference it makes in how I feel. If I've been sleeping 3-4hr blocks, though, getting more sleep feels nice but many times it's hard to notice much of a difference the next day.

The timing of last night's great sleep is particularly wonderful, as I'm trying to prep things for Quinn's first birthday which is TOMORROW. Yes, really. I'm currently sitting in the car, Q asleep, after picking up the ingredients to make his birthday cake (chocolate with chocolate frosting and chocolate sprinkles, as mandated by Donovan). Another thing I'm realizing: the boxed cake mixes are not only more convenient, but a good deal cheaper to make, too...tho that might be my own fault for going for the fancy vanilla extract and cocoa powder. Hopefully it will be delicious, though.

So yeah, I also still need to write birthday posts for tomorrow and do a few other things, all of which are much easier to do with my head not in a sleep-deprived haze. So thank you, Quinn, for allowing Mama to sleep. It's like you knew you'd benefit from it in the end. ; )
Posted by Marcy at 9:23 AM 3 comments:

rantings of a sleep deprived mom

A few weeks ago I night-weaned Quinn to see if it would help with his sleep.  It actually went pretty easily, so I guess he wasn't really that hungry at night anyway.  His sleep had gotten better in some ways.... ironically, however, it's meant that my sleep is actually worse.

He's been sleeping a longer stretch from about bedtime (7-8pm) through till anytime between midnight and 3am.  Which is GREAT.  Unfortunately I can't seem to get myself to bed before 10 or 11pm.  And, he's also now taking longer to get back to sleep when he wakes up.  For a little while he seemed to be getting into a "schedule" of waking up around 2am and then sleeping again till 5 (when both kids would be awake for the day), which worked ok.  It still means I'm not getting a whole lot of sleep, but at least getting 3-4hour stretches makes a whole world of difference over 1-2 hours at a time.

But this week has been kinda hellacious.  He's been waking earlier, more often, and taking longer to fall asleep.  Two nights this week he was up from about 2-4am-- would fall asleep easily in my arms while rocking him, but if I tried to set him down or even move at all he'd wake up and start crying.  At least the mornings have started improving a bit, too-- D's sleeping in a little longer and staying in his room playing for a bit after waking up, and in turn I've been able to get Quinn to try going back to sleep when he wakes at 5am.  It usually means 30mins-1hr of rocking after which he might sleep another 20 minutes in his bed, but I'm hoping it might help "reset" his waking schedule and maybe eventually he'll sleep through till 6 or 6:30 rather than 5am every morning.

But, yeah. End result-- I'm getting very, very little sleep these days.  Or at least this past week.  To the point where it almost physically hurts.  It's also frustrating and a bit scary, as a few times while driving I've been so tired that I can tell my attention isn't as good as it needs to be, and it feels as if I'm at the equivalent of driving drunk.

And what sucks the most is feeling like there's nothing I can do to change any of this.  I just have to wait around for Quinn to figure it out and start sleeping better on his own.  Sure, I try all sorts of things-- rocking in the chair, nursing lying down to sleep, co-sleeping, not co-sleeping, using a nightlight, leaving the room brighter/darker, using white noise, keeping the room quiet, etc etc etc.  At this point I'd be all for trying to do sleep training, except I honestly don't think it'd even work (since the sleep disruptions are closer to morning when the body isn't as tired anyway, so he'd probably just cry for hours and waking D up as well).

Nothing ever stays one way for long, so I'm hopeful that next week will be better.  That he might sleep a little longer at a time, that maybe I'll get myself to bed earlier in the evenings.  But yeah, it just sucks to be so tired, to feel so frustrated especially in the middle of the night, wondering why in the hell this baby has so much trouble sleeping, having no idea when it will end (D started sleeping through the night at around 1 year, but I've also heard many stories of kids waking frequently well into their second or even third year), and not being able to do a damn thing about it.
Posted by Marcy at 2:31 PM 4 comments: