A couple weeks ago our internet was out for close to two days. It started I think sunday afternoon, and when we still didn't have home internet on Monday morning I suggested that we get lunch at Panera and bring our laptop and ipad for a wifi hangout. 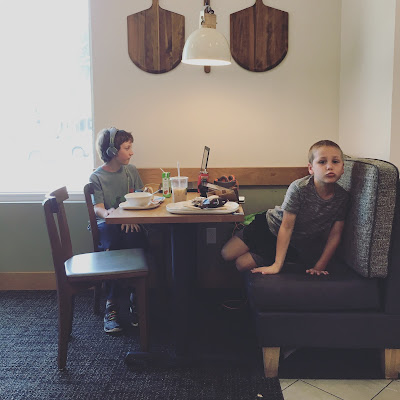 So there we were at our local Panera, D watching youtube on his laptop and Q watching a show on the ipad. I had my kindle reader. And I kinda smirked to myself, wondering how many of the people in that restaurant were looking at our table and clutching their pearls-- I could just hear the complaints, about how these kids are ALWAYS on their screens, and look at that family IGNORING each other because of their addictive screens!!

What they couldn't know is that both my guys spent a solid 3 hours that morning running around playing games at a park. Yes, shockingly, they love youtube AND the outdoors! Also, the ways that we connect over the content they love so much, watching shows together or talking about their favorite games. It seems a shame to me how people assume "screens" are isolating, not seeing the many ways they can bring people together.

I recently heard a group of parents lamenting the "screens addiction" in kids today. One complained of a teenage nephew who was glued to their phone for the entirely of a family reunion. I instantly remembered what it's like to be the awkward 13 year old among your aunts and uncles, and how much time I spent hiding/escaping behind a book rather than having to answer the same set of small talk questions about school and whatnot (remember when it was books that we demonized instead of screens?). I also wondered if anyone had really shown genuine interest in that 13 year old nephew-- asked them about what they like to do, what they were doing on their phone, and really listened vs judging or making condescending remarks about screens rotting their brains? I know my introverted and video-game-enthusiast 10yo kiddo will happily put down his phone and talk your ear off if you ask him about his favorite games and really, truly listen (perhaps that will change in a few years).

Maybe next time you see a kid on their phone or ipad, instead of rolling your eyes and judging them, maybe you could give them the benefit of the doubt. Maybe they don't spend every waking moment on that device (how realistic even is that?). Maybe, just maybe, you are only witnessing a few minutes of their day, which may not be representative of their entire lives. Maybe even dare to ask them about what they're doing, not out of condescension, but muster up some real interest and you might be surprised to see their response. Connection, after all, stems from sharing your interests with others, and why would that not also apply to the things we do on screens?
Posted by Marcy at 10:41 AM 1 comment: