I've been reading The Read-Aloud Handbook by Jim Trelease the past few days. Most of it is fairly familiar stuff (I mean, the most basic premise of the book is read to your kids. Often. Starting as young as possible, continuing for as long as they can stand to hear your voice). But it's given me some new ideas for encouraging or fascilitating read-aloud time. Like I now have a stash of a few books in the kitchen, near our dining table, and we've spent some time over breakfast and lunch several days this week reading Mo Willems and Bill Peet. I'm stashing baskets of books all over the house so there's always something interesting to see or offer to read.

We've also been exploring audiobooks in the car. This week we've been listening to Harry Potter and the Chamber of Secrets. I was fully prepared for the boys to reject it and call it boring, but they seem into it so far-- they sometimes even ask o listen for another few minutes once we've gotten to our destination, before getting out of the car. D also asked to re-download the Lego Harry Potter game we had on the ipad to play it again, so he's experiencing the stories that was as well. I've gotten a few others from the library for us to give a listen to. I have a cd of Douglas Adams reading a few excerpts of his books at a live concert that the boys found hilarious, I think more because of Adams' highly animated reading style more than anything, so I got my hands on him reading Hitchhiker's Guide and we'll give that a listen soon, too. I've told him in passing about the part with the whale materializing in space and falling, and this morning I found the passage in the book and read it to him and he loved it, too, and I just love those moments of sharing something awesome with my kid.

It's exciting because the past few months D in particular has seemed kinda... meh... on books and reading. He doesn't like going to the library anymore or picking out his own books. When I read to Quinn D will often come join us (funny how as a baby Q was the one who discouraged reading time so much, bc it was so difficult with him around... now Q is often the one to initiate, and get the rest of us to sit and read with him), but D hasn't been as interested in initiating reading. It just seemed like he was less into books in general. And yeah, this bummed me out. But I had hoped it was a phase, and sure enough he's coming around again and it's great. Part of the key is finding the right books to hook him in-- right now he loves graphic novels, and anything silly or funny. He LOVES the Pet Shop Private Eye books (I finally started buying copies of our own, after checking them out from the library multiple times), and Binky the Space Cat, and also greatly enjoyed the Zita the Spacegirl books. And he's even been more into picture books again, whereas for a while there he seemed to kinda turn his nose at them. It's pretty awesome to have him running up to me again asking, "Can we read some of this now, please?"
Posted by Marcy at 2:22 PM 1 comment:

I consider myself a social justice activist.

Anyone who follows me on twitter or facebook should not be at all surprised by this because I post stuff about race, gender, gender identity, etc, ALL THE GODDAMN TIME.  I think most of my friends are probably sick of me, honestly. Yet I keep doing it. Why? I don't know. I blame my hopeless optimism.

I have a near-constant debate with myself over whether it's worth it. Am I even doing anything of value? A few times I've had people thank me for speaking out, that they would not have known about X or Y if I hadn't posted about it. That feels pretty damn good, like I may actually be making a small difference. I also think back to when I was utterly clueless about a lot of this stuff, or at least had way fewer clues than I do now, and the people who took the time to calmly and patiently explain to me how clueless I was and helped me realize a whole lot of stuff I had no idea about. They helped me immensely, and I want to "pay it forward" so to speak.

But so much of the time it feels futile. It feels like I'm just preaching to the choir, or shouting into the void. I get in debates with people and they soon make it abundantly clear that they have no interest whatsoever in hearing anything new (one of my biggest pet peeves-- people who claim to be data-driven, yet when presented with plentiful data and evidence insist that all of it is crap because I guess anything presented by a raving liberal such as myself is automatically discredited, no matter the original source. And then they refuse to provide any evidence to back up their claims. It's like hitting your head against a wall).

And yet I keep going. Why? Hopeless romantic. I refuse to give up on people. I expect people to be reasonable, and so if I can just find the right reasonable and logical argument they will see the light. So I keep trying, even when it's clear I am not being heard (and yet I still hope... maybe my arguments will steep in the back of their minds and change them over time. Or maybe someone else is reading the exchange and benefits from it). Or maybe I'm the one being unreasonable. I don't shy away from the bleeding-heart left-wing liberal label.

So I don't know. The online stuff feels silly and pointless, except it doesn't. I see injustice all around and people hurt by it every day, and I want to do something (gotta alleviate that white guilt) even as I feel powerless. I want to do something meaningful, beyond posting links online, something that actually does something, makes a real difference, but I also feel like I don't have the space for that in my life right now (as I keep having to beg my kids for just five minutes, please, to write this post while it is fresh and in my head, because if I wait till they're in bed tonight I know it won't happen). Or maybe I'm just making excuses for not doing the real, hard work.

So I don't know. I will probably keep doing what I'm doing. And I will keep questioning it. And maybe one day I will do something more. I guess for now I will keep shouting into the void and hope someone is listening. And try to raise my boys to see the world as it is, not just from their personal perspective; and to want to make it a better place not just for themselves but for those who are not at all like them.
Posted by Marcy at 4:01 PM No comments:

Yesterday we went to a family picnic with our homeschool group at one of my favorite local parks. There is a shallow creek that runs through one part of it for part of the year, and it will probably dry up soon but for the past few months it's provided all sorts of great fun as the kids splash along it and collect rocks and have a grand ole time getting soaked (yay for mild California weather that allows this).

I posted several pictures on instagram, but these are two of my favorites. Especially that one of Quinn. 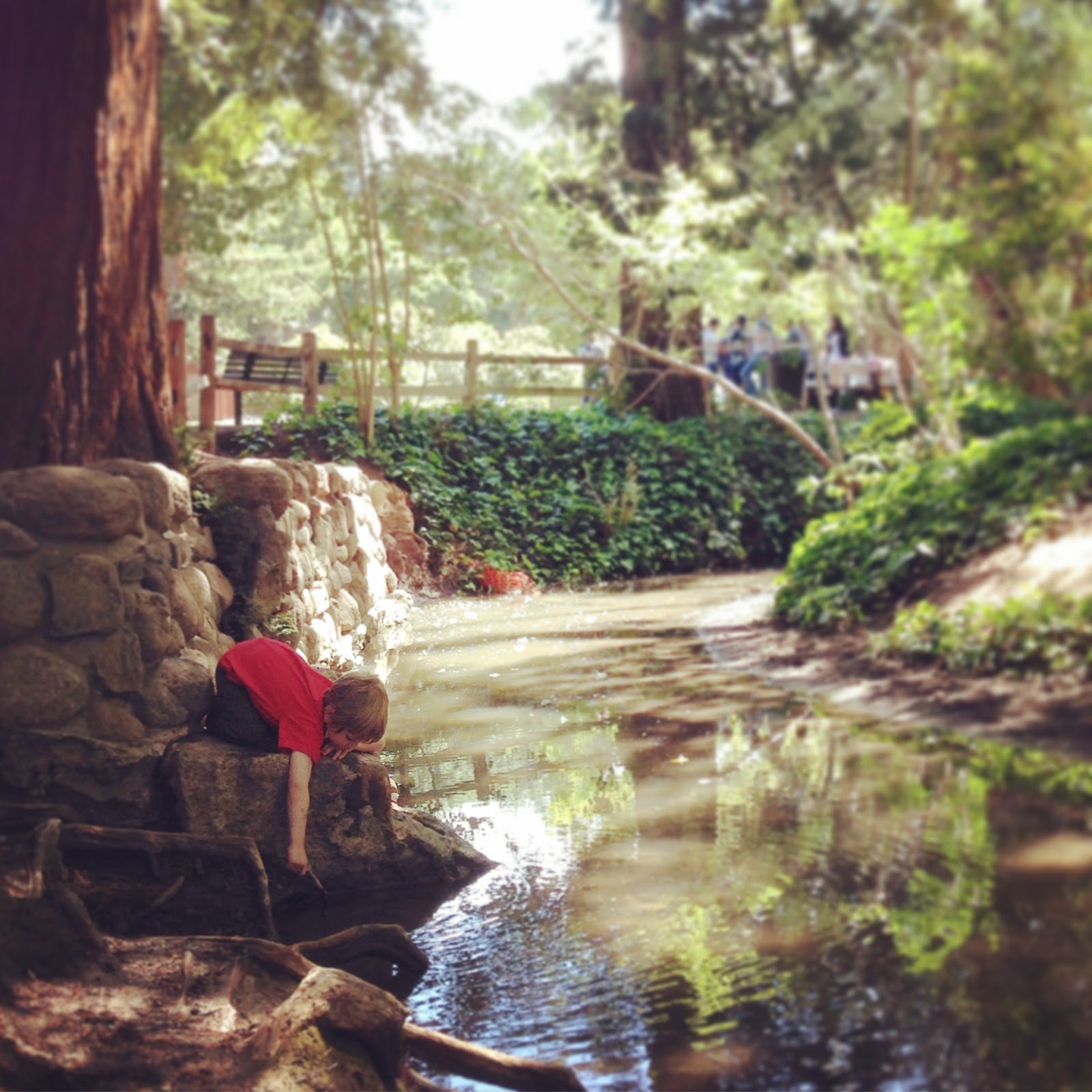 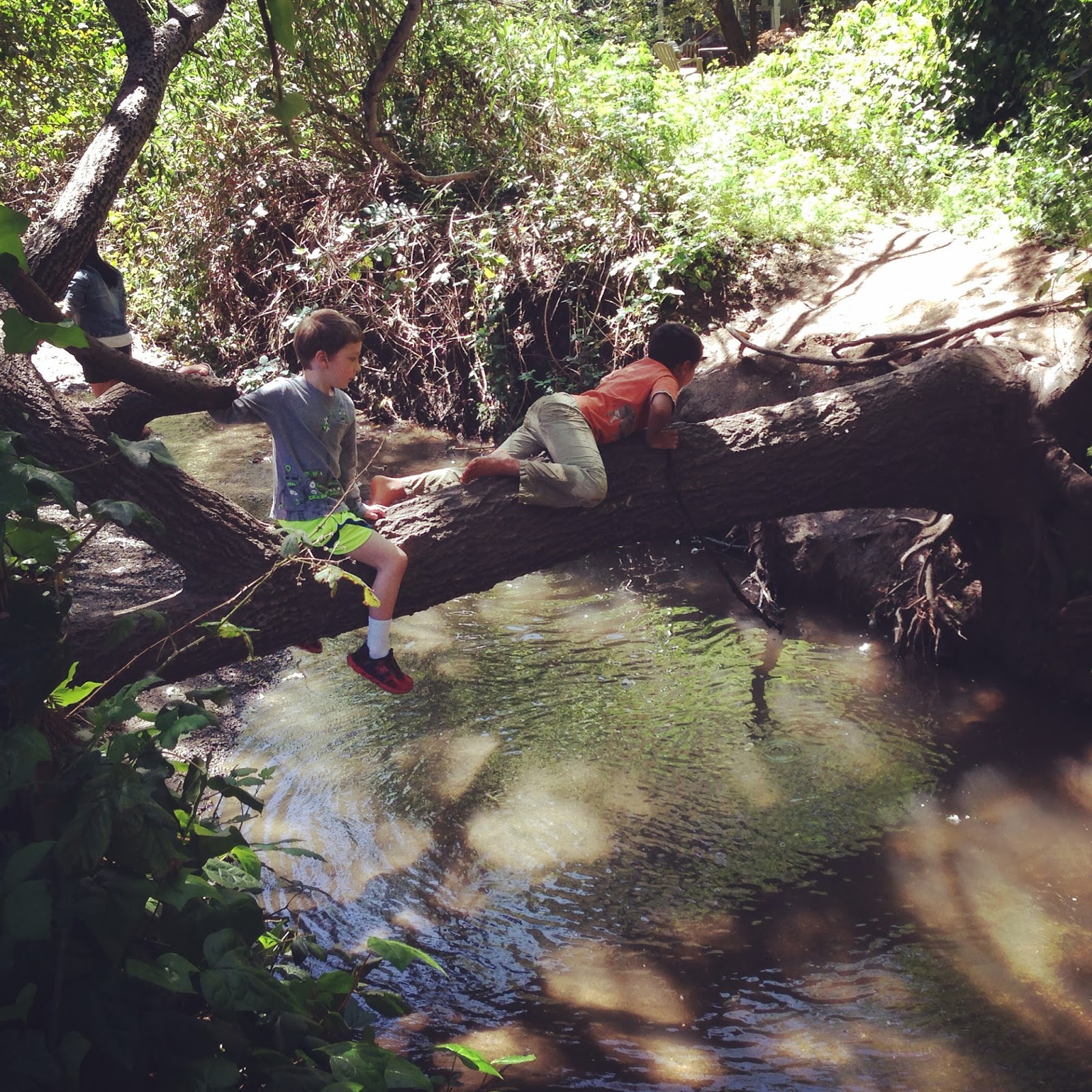 I like this homeschool group-- the families have all been really warm and welcoming. I love the discussions that take place, the wealth of ideas, the inclusiveness. The way the parents give their kids plenty of freedom and space, while also keeping mindful of what is going on and stepping in when needed. The parents and kids seem to have these lovely connections, in tune with each other.

There's a decent age range of kids, at least a good range around that of my kids. They have fun at our park days, though D hasn't quite clicked with any of the kids there-- he plays with them off and on during our park days, but so far there hasn't been an instant attraction like when he met Ethan in NH (Q has an easier time jumping in and joining whatever the others are doing). But who knows what may be simmering, developing more slowly. He seems fine with everything as it is-- doesn't seem to be longing for anything, and likes both playing with the kids who are there each week, or just sitting with me when he's not feeling as social or energetic. But sometimes it's hard for me to let go of what used to be, that sweet little setup we had in Sachem. I miss it for him, and hope we eventually can find something like it here as well.