So I joined facebook today. At the urging of some of my new local Geneva friends. And it's kinda fun. ; ) I might like it better than myspace... though I think I probably should get past the initial fun setting-up of everything first before making such declarations.

Today was fairly uneventful-- I laid in bed reading (with Sierra curled up on my lap), washed dishes, cleaned up a bit downstairs... tomorrow I have some more tidying up to do before Jennie arrives from London to spend the weekend with us. =) We don't really have set plans yet for what to do while she's here, but then again sometimes that just works out better than the whole "planning" bit organized people like to go on about. Tonight Zach and I went into town to hear a child psychologist from the local Brazelton institute give a talk about their methods, and how to try to understand babies' needs a bit better by looking at their non-verbal communication. Unfortunately the lecture itself wasn't all that informative (I think the fact that she was giving it in English hurt her a bit, not being as free to express things as she would've maybe liked) but my curiosity is peaked and I might check out one of their books. Though a lot of it (from my limited knowledge) seems to center on really observing the infant, and gauging how they react to stimuli to see how much they can tolerate (and keeping that in mind for future interactions so as not to overwhelm them).

So my friend Jessica has these kittens. And she's trying to find homes for them. And, dammit, they're friggin beyond adorable (I haven't even seen them in real life yet, this is all from the pictures I've seen). And I totally want a kitten (who wouldn't want a kitten???). But we can't have a kitten. There's a million reasons why it would not be good for us to get a kitten right now (not the least of which being that we'll have an infant to take care of in about 4 months). But damn would it be fun to have a kitten in this house, to play with Sierra and run up and down the stairs with her.

At night, as bedtime approaches, I think Sierra senses it and will start going up and down the stairs and want to play on them. The best is when she's up on a floor above me, and she peeks her head between the steps down at me: 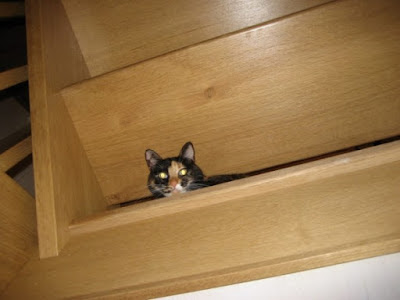 She's just too cute sometimes. Like when I open the front door upon returning from an afternoon out and about and I immediately hear the sound of the bell on her collar ringing as she rushes down the steps to greet me. Just a minute ago she went NUTS batting at the glass on our front door, her tail all poofed, and Zach and I immediately became curious, and very proud of our cute, feisty kitty, while running to the door to find out what was going on. Turns out there was a cat in our patio. Sierra's still sitting at the front window, keeping watch (this might be another reason not to get a new cat). Ah, Sierra. It will be a bit sad when we don't have as much time to hang out with her anymore. I just hope she doesn't take it out on Loki...
Posted by Marcy at 2:12 PM