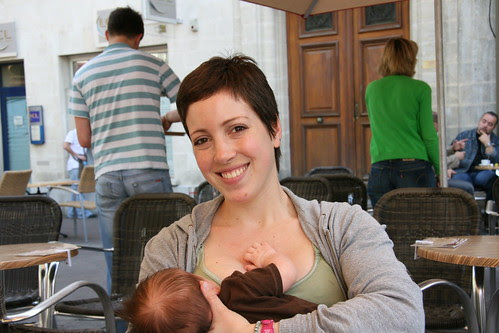 At first, I was kinda terrified of trying to Nurse In Public. It took a good month or more before I felt at all comfortable nursing D, even in the comfort of our own home, and then though of trying to perform what at the time still seemed like such a difficult task with the added stress of being out in public just freaked me out. I'm a HUGE proponent of women being able to feed their babies whenever and wherever they wish, so I was surprised at my need for privacy.

Eventually I started feeling a bit more comfortable with breastfeeding, and we started taking Donovan out a bit-- first just to people's houses. We had dinner with some friends and when D got hungry I went to the couch in the next room and nursed him in semi-privacy. I worried about D not eating well while we were out, about him fussing at the breast, about him pulling away often and exposing my nipples to the world. But that nursing session went well enough, and then I fed him a few more times in other friends' homes, and started feeling like I was getting the hang of it for the most part. I still brought my nursing cover most everywhere, even if I didn't always use it.

Then a few things happened to really bring me out of my shell. Zach made a comment about us being in Europe, and, well, bare boobs are everywhere when you go to the beach, so people here probably won't mind a bit of nip here and there on accident, right? I read one woman's manifesto to proudly breastfeeding indiscreetly in public, a blog post I wish I'd bookmarked but don't think I saved anywhere. Then we went into town with Zach's mom a few weeks ago and stopped in at Les Recyclables for a drink. D got hungry, and I wasn't really wanting to deal with the extra fabric of the nursing cover. I looked around this cafe that, when I first discovered it, had thought it such a 20-something hipster hangout, yet realized now that (thanks to it being non-smoking) it's actually quite the family-friendly establishment. Looking at the numerous young children at the tables near ours, I went ahead and fed my son, uncovered. Sure, I tried to make the unhook-nursing-tank-shove-boob-in-mouth maneuver as quickly as possible, but I also didn't freak too much about if anyone happened to see anything. I was rewarded by encouraging smiles from the families sitting nearby (including a very interested toddler boy who started most of the time that I was nursing!).

And then came our trip to Avignon. Where we spent much time walking around with D in the open, where prams and strollers were everywhere in sight, where the best way we could have a sit-down dinner was to pop D on the boob when he got hungry (and sometimes let him fall asleep that way). And now, I practically consider myself a pro. Sure, he cried at me some during/after a feeding. And I'm sure a few onlookers got a peek at my nipples (though when you think about how big D's head is, he really does do a pretty good job of keeping me covered). But as I get to feeling more comfortable and self-assured as a mother, I'm getting back to that sense of, well, why wouldn't I feed my kid wherever needed? And is it really necessary to cover up?

It's helped A LOT that I've only ever noticed those warm, encouraging looks while nursing in public. Maybe I've gotten some dirty ones, but I haven't noticed those. I also really really love using my nursing tanks, as they make it much easier to feed him with less hassle (funny, I don't mind baring my breasts to feed him but don't want to have to lift my shirt to show my tummy...). Thinking about it, I wonder if I'll feel the need to use a cover when D and I are in Texas. Will I get more dirty looks there? Will I feel as comfortable breastfeeding without needing to cover up? I don't know, and am honestly kinda curious to find out.

Maybe I have become one of those women, the moms who'll just do what they need to do, even if it's not publicly welcome, who'll get the annoyed looks from child-free people around them. I do admit that, yes, on a couple occasions Zach and I also changed D's diaper on the chair next to ours at an outdoor cafe after having eaten/drank something there (only wet diapers, btw, and really I'm going to avoid laying him down, even on a changing pad, on the floor of some nasty bathroom whenever I can). But maybe I don't really care anymore if I look weird to, or annoy, others in public. I'd rather have a happy baby, and, really, my guess is those around us will, too.
Posted by Marcy at 2:26 AM