adding to my camera collection

I had a birthday last week, I am now a ripe ole 34 years old. Following a few strong hints Zach got me a vintage twin lens reflex (tlr) camera... or, well, two actually, thanks to a little mixup on ebay. So on my birthday (or really, on the night before, apparently I'm not the only one who gets antsy about giving gifts early) he surprised me with them, along with a pack of rolls of Portra 400 film. 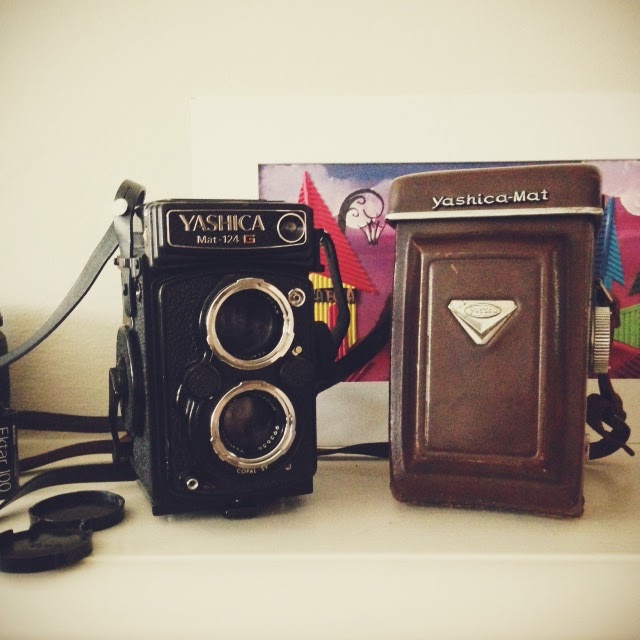 Hello there, gorgeous. Both of you.

I gleefully check them over, and quickly realized what foreign beasts they are, and promptly headed over to the google and youtube to figure out how you even load film into these things. The buttons all seemed to work, but neither camera was film-tested so I wasn't even sure the photos would turn out. Which, of course, means you HAVE to try out a roll in each just to check if they work, right? The rolls only hold 12 exposures so it's not that difficult to burn through them...which I did, in just a few short hours. 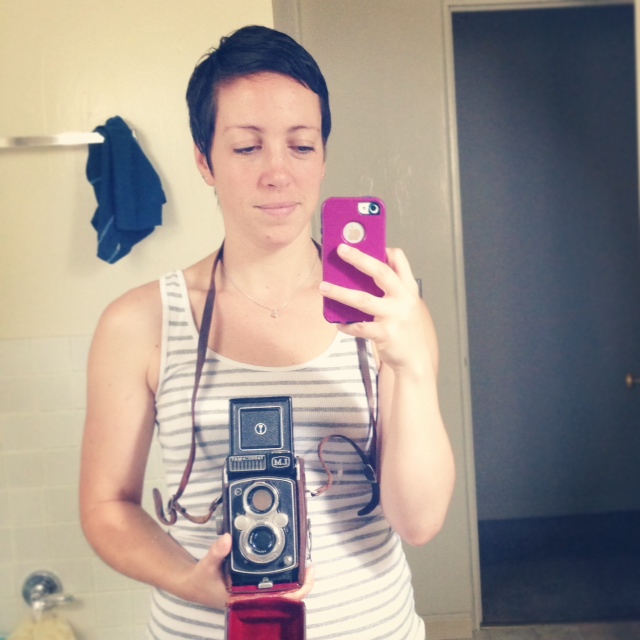 Shooting with a tlr is like a completely, totally different experience than with even my film slr. I'm used to having a fixed focal length (no zoom) and prefer it anyway, but I don't usually shoot in fully manual mode. The cameras both have light meters that seem to work (they respond to changes in light and settings) but I don't trust the readings, so I downloaded a light meter app on my phone and have used that to figure out the right settings. The ISO is set by the film-- there is no adjusting it for a dark room or bright sunlight. The apertures are a fairly standard f/3.5 to f/22, but the fastest shutter speed is 1/500th of a second (and each shutter speed interval is a full stop-- my "fast" shutter speed options are 1/125, 1/250, and 1/500...no inbetweens). I have to manually crank the film after taking each picture, and then wind the lever back to prep the shutter for the next one. And then there's the viewfinder, which is much larger but is on top of the camera, and a reversed image which makes it really really weird to try to adjust the frame (there is a nifty magnifying glass that I can pop out to better see close-up details in the viewfinder, for easier manual focusing). Lastly, the minimal focusing distance is something like 3 feet. Shooting with these babies made it really obvious how often I like getting up close to my subject. 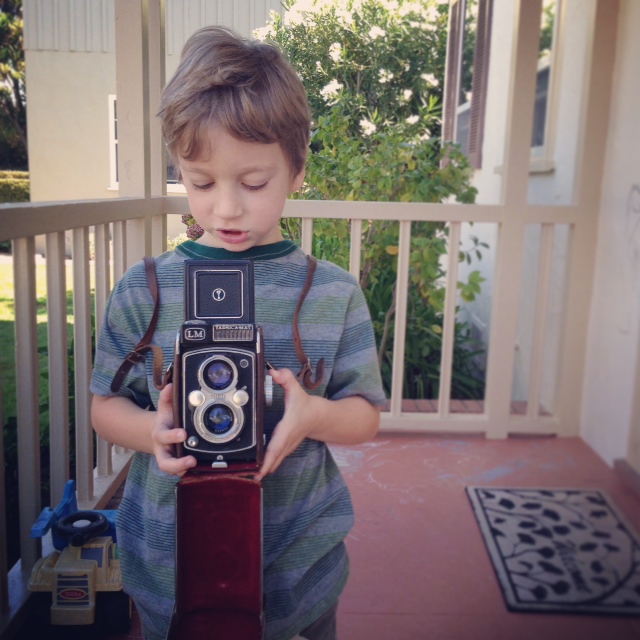 Even D got in on the vintage action.

All these things impose some serious limits on what kinds of photographs you can take, and how. Eg-  indoors is a bit too dark without faster film, while outside I can't take a dreamy wide-open photo if it's too bright.. and that's kind of the fun of it. It's awesome to have a super nice dslr that can handle almost any situation I can throw at it (the limits there are my own skill and knowledge), and it's a whole different experience to have to stretch my creativity and skill to work within the parameters of these oldies. I have to see and think very differently than with any of my other cameras (film slr, dslr, iphone).

So, I shot a roll of film in each of the Yashicas and took them in to get developed, and just today got the results back. I am happy to report that both cameras seem to work fabulously. The first two shots in each roll didn't turn out, which is probably from a mistake I made while loading the film? But the others turned out fine. They're not super great pics or anything, as most of my focus (heh) was seeing what they could do and getting a feel for them. 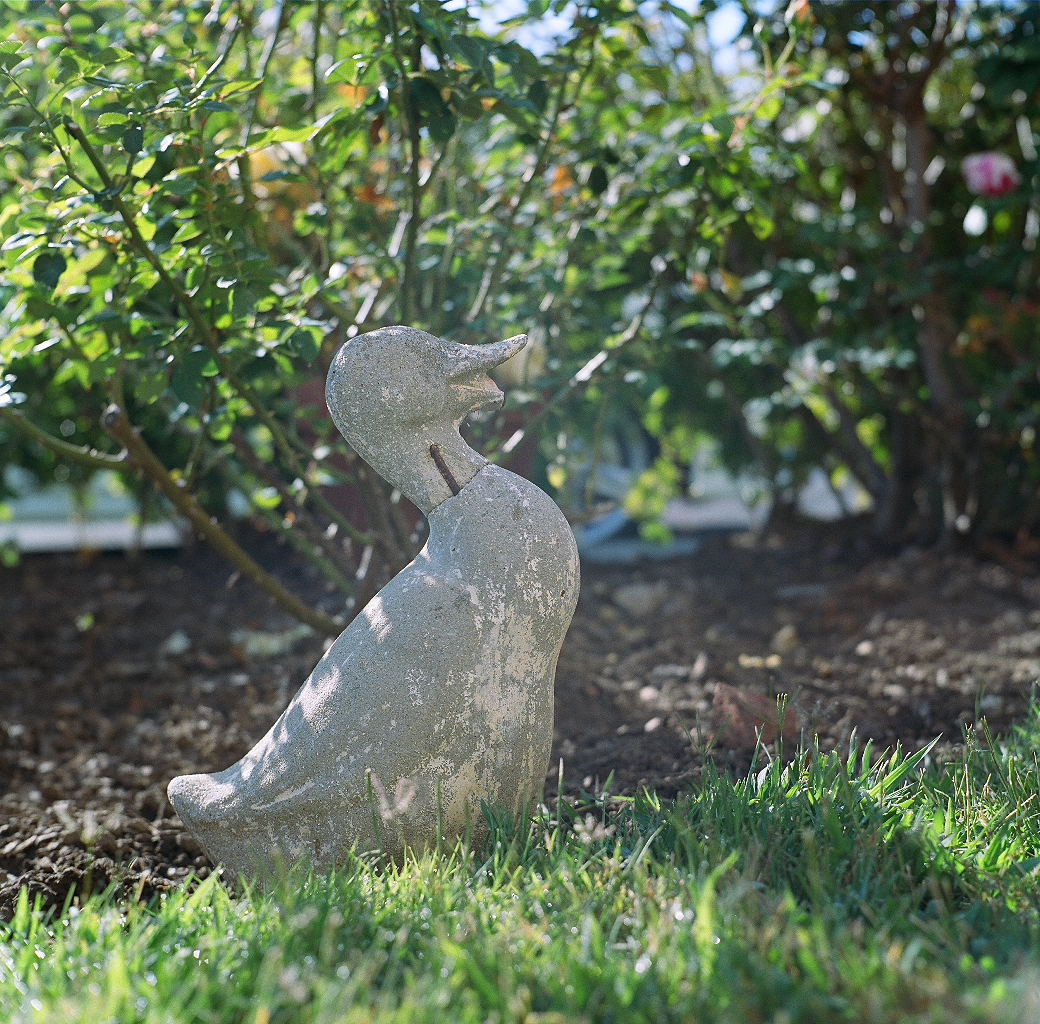 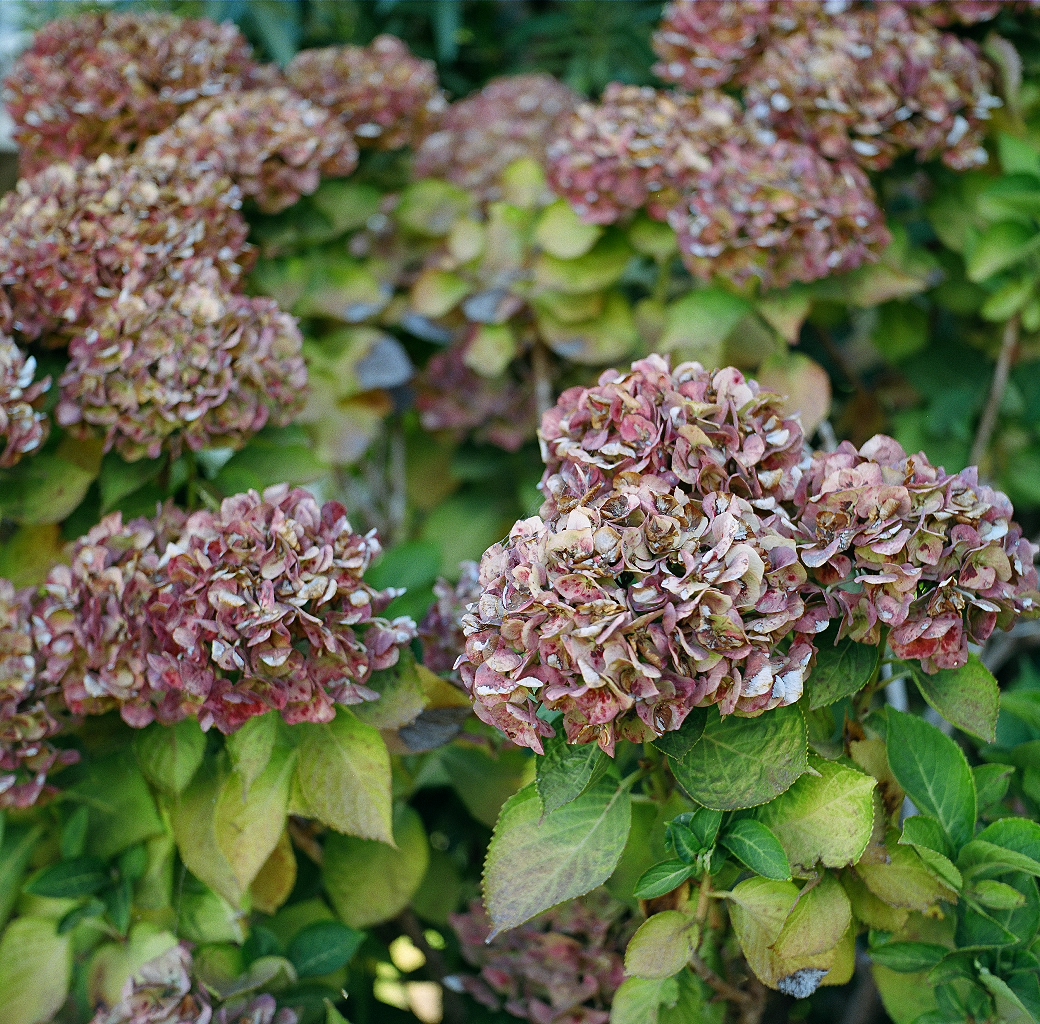 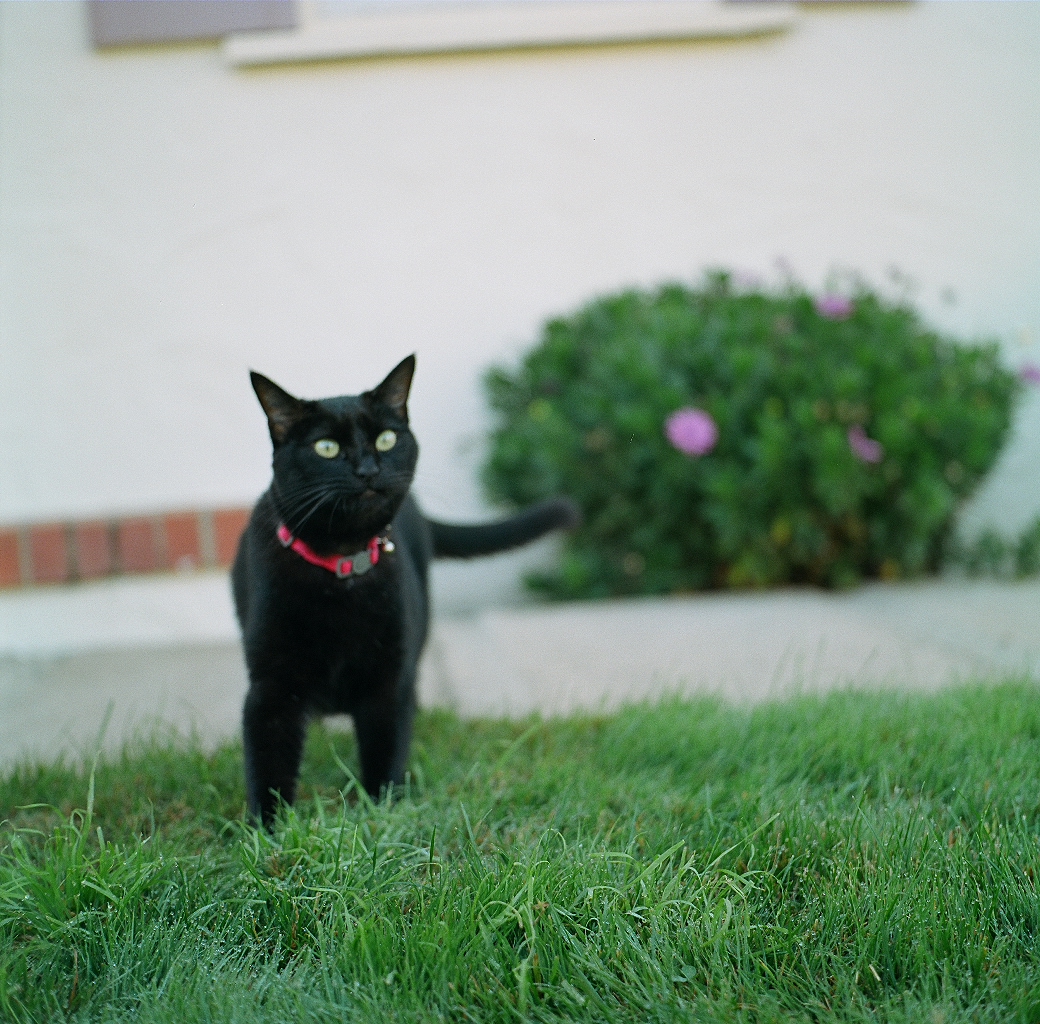 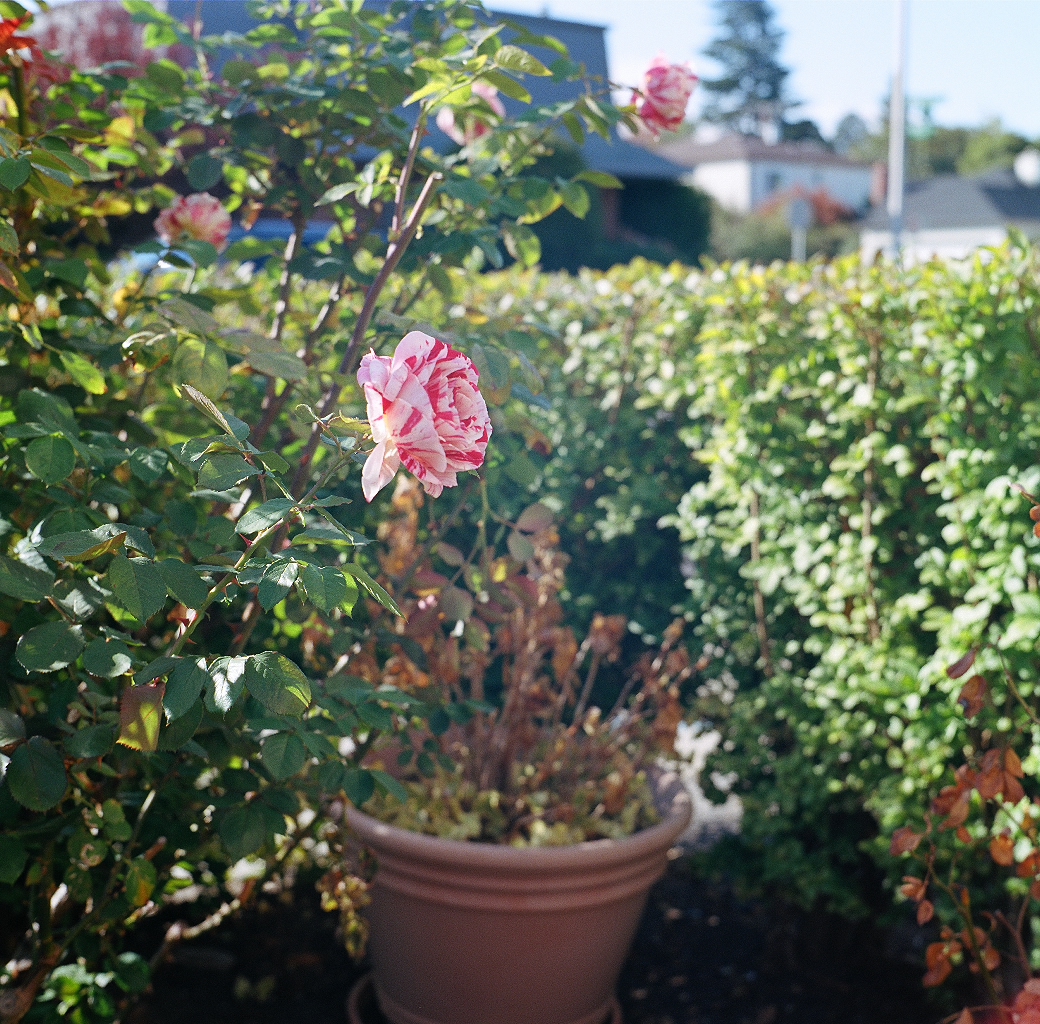 So now that I have a bit of a feel for how they work and how the resulting images may look, I get to stretch myself further trying to think of what subjects are best suited for them and how to use their limitations to my advantage. It's not a style that comes naturally to me, but I do think it could be pretty fun to try.

BTW I really don't need to keep both cameras, and will likely be selling one of them soon... let me know if you happen to be interested. ; )
Posted by Marcy at 8:24 PM

Email ThisBlogThis!Share to TwitterShare to FacebookShare to Pinterest
Labels: Film